Written by MiddlewayMedicine.com on September 29, 2013. Posted in Acupuncture, Zimmerman Articles. 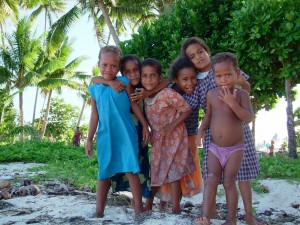 Part of our honeymoon was spent on a picture perfect Fijian island paradise. We ended up in a very remote village at the end the road where they offered an “eco-tourism” hike to a waterfall and a village stay. When we arrived in this jungle beach village there were no other tourists, only very friendly and easy going Fijians that spoke fairly good english. They were living a traditional Fijian subsistance lifestyle, with no electricity. During our hike to the waterfall we shared with our guide that we are healers.

The next morning some men from the village approached us and asked us if we could treat their auntie (the chief’s wife). In Fiji the village chief has some serious clout and there are many taboo behaviors in the chief’s presence, of which we were mostly ignorant.

We agreed and were soon led to a thatched roof hut where we were introduced to the chief and his wife. Both only speak Fijian. We immediately noticed that she is not well and has suffered an apparent stroke.

To treat a stroke with acupuncture we typically insert needles into the scalp…. and it happens to be a major taboo to touch the scalp of a Fijian. Hmmmm……we asked for permission and went for it.

Typically, it is very hard to treat stroke symptoms once 6 months of time has passed, so we took a deep breath, said a prayer, touched the taboo head and gave her an acupuncture treatment.

The next day Clark and I went for a walk in the jungle and were away from the village until afternoon. As we walked back into the village we were greeted by a group of eager Fijian boys approaching us in a state of great excitement. YIKES…….

Our minds went to a place of OH MY, I hope this is good, since we are at the end of the road and just treated the chief’s wife for a vexed condition.

The group of men told us we must follow them to the chief’s hut: They did not share why. We quickly walked to the hut to find the “Aunti” sitting up with both eyes open, smiling, and feeding herself.

After this moment, we became famous in the village and across the small island. For the next 3 days we held an informal clinic using the other beds in our “guesthouse” for treatment tables and treated some 50 villagers with our limited needle supply.

After 3 days, we made a promise to the village that we would return and offer our services once again.

What a healing for everyone!