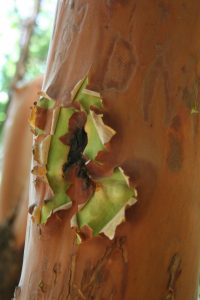 My father lived on a lake.  Before he built his house near the lake shore, the wooded lot was a favorite picnic and party spot for trespassing revelers.  It had a nice little beach for swimming and its location offered good views of the lake.  There was an giant old beech tree that watched over the place.  It’s smooth bark was covered by the scars of lovers initials, and pronouncements of past visitors.  As is typically the case, one set of carvings beckoned others to follow, and so the majestic old tree was marred by remnants of lovers’ promises.  There was something so sad to me about this beautiful old tree that people chose to cut so deeply.  Though the lovers had come and gone, their markings remained.  In a way this is how many of us relate to the past.  We carve something into a moment and try to keep it from changing.  Though the goal is to have a touch stone to a moment of connection and love, the scars that we create from attachment can haunt us and hinder growth.  How do we honor a moment without holding onto it too tightly?  How do accept the past without having it define us?  I never carved anything into a tree.   I thought that it was somehow an expression of vanity; an insistence that life become stuck in a time that best suited me.  But time doesn’t work that way.  It saunters, it marches, it moves.  We are meant to move with it.  The moment is always right where we are, not where we were or where we hope to be tomorrow.

When I moved out west I discovered a whole new world in the forests.  I fell in love with madrone trees upon my first encounter.  Their red berries; their strange habit of losing leaves in the summer and holding onto them through the winter; their changing colors, like the skin of a chameleon.  But it is their smooth bark that really captivates me:  It seems so sultry and inviting.  It beckons you to slide your hands over their unashamed form.  One of my favorite madrone trees is an old grandmother that lives beside the trail we follow on our morning walk.  She stands next to the irrigation ditch, so she enjoys plenty of water.  That has encouraged her to grow tall and spread her branches.  One day on my walk, my heart sunk when I noticed that someone had carved their initials into the heart of tree.  It was like a cherished friend had been defiled.  I felt angry and sad that someone could take something so beautiful and change it forever.  I thought about what I would say to the person if I ever discovered who had done such a thing.  But as I watched the tree over the next year, I was delighted to notice that this madrone was gently letting go of the initials.  Unlike the beech tree I grew up with, it was healing the insult without scaring.  It wasn’t defining itself by a moment from the past, it wasn’t stuck in the wound.  Rather quickly the bark again became smooth where the initials had been.  I discovered yet another reason to love this magnificent tree.  The madrone doesn’t seem to hold onto the past.  It exists in each new moment, fresh and alive.

Sometimes the past is full of pain and disappointment.  Sometimes the past is full of inflated memories that we try to recapture again and again.  Too much attention to either can hold us back, or taint our current situation.  The carvings of the past can be promises of lasting love, or insults and objections.  Either can linger and hijack the present moment.  So how do we let the past inform us without locking us into one set of beliefs or one defined story? Like a tree we are all influenced by our past.  The light coaxes our branches and leaves toward the open spaces, the water and soil nourish our growth.  The wind breaks off branches, and other trees can block our view of the sky.    The structure of the tree is largely determined by its history of sun and rain, but also by what it has let go of.  If the madrone held onto everything that has touched it, it would be like the damaged beech tree from my childhood.  The carvings of life would fester and ultimately rot.  The madrone integrates the past without being a prisoner to it.  It shakes off the scars of being cut by life,  and continues to grow toward the light. The trick is to let life influence our path, but not entirely determine it.  The trick is to notice the past, to welcome its wisdom, but not be a prisoner to yesterday’s experiences.

When I last visited my father’s home I was saddened to find that the old beech tree had reached its end.  It rot from its middle  where the collection of old initials were concentrated. The cuts apparently were too deep and plentiful:  The tree wasn’t able to move past them.  If it could have learned from its madrone cousin how to let life mark on it without holding onto the messages of the past, perhaps it would still be standing tall today.