Written by MiddlewayMedicine.com on February 5, 2014. Posted in Digestion/Diet. 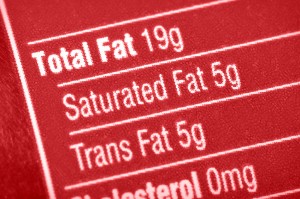 I remember spreading margarine across toast when I was a kid. Unlike butter, which was hard and difficult to spread, margarine covered the toast with seemingly magical ease. Mom told me that it was much better for me as well because it was made with a different sort of fat that the food scientist assured us was much healthier than the butter that humans had eaten for millennia. I marveled at the thought that the scientists were busy in their labs creating healthy new foods and food additives to make the world a more enjoyable place. Being a kid, I didn’t give the “healthy” part of margarine much thought, but I did appreciate that mom let me use as much as I wanted on my toast.

That was 30 years ago and now science has proven that trans-fats in all of their forms are pretty toxic to the human body. Though they are found in trace amounts in certain meat and dairy products, trans-fats are most commonly a processed ingredient that is added to foods as a way to extend their shelf-life, flavor and consistency. They gained popularity in the 50’s with the increase in food processing, and then really took off in the 1970‘s when it was assumed that high fat diets were causing an increase in cardiac related diseases. At this time the medical community recommended low fat, low cholesterol based diets which paved the way for trans-fats to be introduced into the food supply in large amounts. This was primarily seen in baked goods and certain vegetable based shortening or margarines. So butter and eggs were out; chemically altered vegetable based fats were the new greatest thing.

Time has a way of flushing out the truth, and this is the case with trans-fats. Their glory days lasted about 25 years, during which time obesity rates and rates of cardiac related illnesses both climbed. They have been proven to raise LDL, or “bad cholesterol” levels and decrease HDL, or “good cholesterol” levels. Some evidence also suggests that there could be possible links diabetis, cancer and dementia, although the information is still being debated. As it now stands, trans-fats have now become not only scientifically accepted as unhealthy but will soon to be declared illegal to include in any foods.

Seeing the trajectory that the trans-fat issue has followed, from a hugely popular and financially lucrative processing technique to its recognition as a serious health hazard, it makes me wonder what other things are largely accepted in the world of food and medicine that may one day be proven to cause previously unpredicted problems. In his blog article that appears on “science20.com,” Steve Savage writes:

We go through fad after fad about what single bad active ingredient to avoid or what magical good component to eat, somehow believing that these simplistic formulas can put us on the path to health. The press, various celebrities and “experts” are often guilty of over-selling such ideas as they emerge incompletely formed from the fields of nutrition or medicine.

So maybe before we rush to embrace the newest and supposed best thing in food and medical technology, we should strive to take more time and be more cautious about what we put into our bodies. In the meantime we should stick with what is tried and true, and eat foods that have been around before humans learned to manipulate them in a lab.